Henge probably constitute the most original band playing in the UK in 2019. Their music is a mixture of rave and prog, with extraordinary musical virtuosity on top of ridiculously danceable beats. But these beats often vary their time signatures in the same song. In some ways they seem like the collective love child of Derrick May and Emerson Lake and Palmer.

They also perform with an elaborate back story and stage personas. The lead singer Zpor apparently grew up on the planet Agricular. He plays the guitar and moves around the stage in an elaborate ceremonial robe with a plasma globe on his head. The bassist/twidder, Goo, whose head looks very similar to the aliens on Mars Attacks, is a refugee from the planet Venus (in fact the last surviving member of his species) following the “Venusian apocalypse”. The band sing a song about this catastrophe and the lead singer always seeks to dampen the audience applause at the end of it with reference to the tragic nature of the event. The keyboardist (Grok) has time travelled from early human settlement – and is properly capable of Keith Emerson style riffs (though how he managed to acquire this virtuosity pre-bronze age is not properly explained). There is also a back story to the drummer as well (Nom), but I can’t locate it at the time of writing.

Henge at Maui Waui is my fourth time watching them. First was at the Magic Garden in Battersea – a really wonderful gig, where at the end, the singalong “Demilitarize” was chanted by the audience, a number of whom climbed onto the bar counter to do so. The second was a pre-festival slot at the Lunar Festival in 2018, where they played brilliantly to a rather muted audience. The third occasion was a bit mixed: a gig at London’s The Lexington which seemed to attract an audience of overaged lads joining in swaying and lary group hugs to which you expect to hear “Wonderwall” loudly slurred. Therefore, before seeing them again at Maui, I was worrying that Henge now had a following of the kind of cave dwellers that the keyboardist so luckily managed to escape via the magic of time travel. 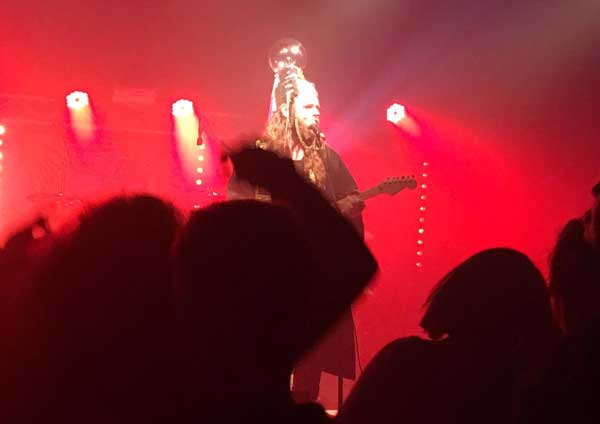 However, that did not happen. The crowd were wonderful. The first two songs were completely new to me and very housey. It started with TB303 noises and got the crowd dancing. The second was even more awesome. In chords it reminded me of early Orbital (the Orbital of “Chimes”) – with that strange naif chord sequences characteristic of early rave, where the not highly musical pioneers probably just pressed the automatic major chord buttons on their Casio keyboards to write their songs. However, this song incorporated that ever-so-slightly-jarring nature of those sequences and made something absolutely uplifting. The Venusian Apocalypse came shortly after.

What was new about this performance was how absolutely effortless the stage craft of the group had become. The lead singer had a kind of liquid migration across the stage, which, together with wonderfully communicative facial gestures alongside the intergalactic camp of his announcements made him mesmerizing. Everything seemed both natural, easy and flawless.

Later the band played “Water” (which gives the singer life which it does “so affably“). The virtuosity of “Get Out of My House/Puck Funk” was amazing with its changes of tempo and rhythm as well as the wizardry on guitar and keyboards that comes with it was as stunning as ever.

At the end, as usual the gig concluded with a rendition of “Demilitarize”. Zpor began with some extremely dexterous manipulation of a Kalimba, to which the band joined in. Eventually the backing is gradually stripped away until it becomes just Zpor leading the crowd in the chant of “We demand/That the weapons of war/Are manufactured no more/Demilitarize/We demand/That we have in its place/The means to unite/And colonize space“. Finally Zpor went into the audience to lead the singing, while the keyboardist Grok, in Bob Dylan style, held up placards for each line of the song for the audience to chant out.

And this is the paradox of Henge. They are both a magnificently entertaining piece of pure escapism – but also they do have the ability to convey themes of disarmament and ecological concern in a way that doesnt feel forced or preachy at all.

In my opinion, they are the greatest band in the UK at present, if not the world.